The second section of our interview on the 23rd February 2017 with Leroy Jones, Freddie Lonzo, Joe Lastie and Louis Ford at The Preservation Hall, New Orleans

Laura: When did you start playing trombone, how old where you?

Freddie: I started when I was thirteen years old.

Laura: And how did you start? What was your, sort of, journey?

Freddie: Let me see if I can make this quicker – I had an older brother and he’s a trombone player, okay – and basically he used to practise at home. But it’s kinda crazy, what he used to do to me is basically he’d lock me out of the room because he didn’t want me to come in and watch him play trombone! It was kinda like, I always said, a forbidden fruit, you know. So when he graduated from high school, he went away to a junior college, and this school only had vocal – they didn’t have any instruments, only vocals. So we were renting a horn at the time and we were going to send the instrument back to the music store. When I found out that he was going and the horn was staying, that was my chance – I scooped it up! I said no, leave it here, I’ll mess around on it!

Laura: What trombone was it? What kind?

Freddie: It was an old King, I can tell you – I feel like it was a Liberty, it was a student horn, yeah, an old Liberty. And basically my brother left it there and I just kinda jumped on it, you know.

Laura: Did you have lessons or where you exploring it for yourself?

Freddie: Well basically it was like in the middle of the year, so what happened was the beginners’ class had already started in the school, so they stuck me in the advance class which, I mean, I had no business being in, I have to be honest. But the teacher would take some time out – she’s come and spend some time with me. She’d stick me in the practise room, you know, kinda sound proof – not completely sound proof – and she’d come in, because she’d put me in the classes with the trombones, the tubas, all the French horns and the baritone – that was all in the same class. So she’d come and spend some time with me and she’d send me to the practise room. It wasn’t completely soundproof so while I was trying to play what she was showing me, I was also listening to what was going on outside. So it was kind of ear training in a sense and what she had presented to me in the books. Erm, I’m going on and on because I’ve lost myself! So basically, I tell you what, I’ll back it up a little more – I was in a woodwind class, so actually I flunked plywood so they wouldn’t let me in, they would happily send me out of that class because I was going around doing all kinds of crazy stuff, so they were glad to get me out of that class, you know “Yeah, you go and play the trombone!” Like I said, I flunked plywood.

Leroy: So you did have private lessons when you started playing trombone?

Freddie: Yeah, she spent some time with me, you know, as much as she could because she had a whole class to deal with. So I mean, if you want to say that’s private, yeah – she had to deal with everybody, but not really one-on-one, nah I never really had that in that sense.

Tom: What about any of you other guys?

Leroy: Well, I started playing when I was ten and my parents rented a cornet for me because the school I was going to had a band programme and the headmaster was Sister Mary Hilary who was Orleans parish, she covered like, Dominican high school, Catholic schools, and she had also St. Leo the Great and uptown Lady of Lourdes. So I wanted to play cornet because Louis Armstrong played cornet and I mean my ears were open to music even before I picked up a musical instrument. Actually, the first instrument I played was guitar and I taught myself before I had a horn, and fiddled around on the guitar until I was about eighteen but I started taking lessons, private lessons, every once a week. I took private lessons for about four years. I became involved with a brass band called the Fairview Baptist Church Marching Band, a Christian marching band that was in essence formed by Danny Barker, who you’ve heard of probably, and Danny Barker was a member of the Fairview Baptist Church. The pastor at that time was Reverend Andrew Darby who asked Danny to recruit some young people to complete this band because there were not enough youngsters among the congregation playing instruments appropriate for brass band. There were a few, but not many, so that’s how I got involved with that, even though I was going to St. Leo the Great school and taking lessons and so the first two years I was not involved with the brass band thing, with the age old tradition of brass band music in New Orleans, which is something that I had been exposed to growing up in the city and going to be part of the Second Line and not to mention too far in to details about that, you know, that proposal of things that were put on by the social aid and clubs, these black organisations that have, they go back a hundred years or more and they were organisations that helped African Americans who didn’t have money for, say, a burial or a funeral, they were helping each other you know. It was a benevolent organisation, and it’s still around today, and they do a parade every year, so I started playing gigs when I was twelve, so I still was in school.

Tom: And that was on the cornet?

Leroy: On the cornet, not long before I switched to trumpet. Everybody played the cornet back then, even the elementary books would be like, for cornet 1, cornet 2, you know, it was cornet parts, as opposed…as far as what I remember when I first started playing in band, and you were playing symphonic music mostly – all classical pieces. Marches, John Phillip Sousa marches mostly and a few other things we did that were related, but I played in band, and it was a sort of a wind ensemble. And later I played in a high school that this young man went to after me, Saint Augustine. They had a bigger organisation – a big marching band, a hundred and twenty five piece marching band and the music got a bit more difficult, it was a bit more advanced. I played with that band, I played with the symphonic band, then we played classical pieces and some arrangements of music for our peers, like pop music that was popular during the 70’s when I was at high school. And from there I went to Loyola for one year before they got the fancy building, I spent a year at Loyola on jazz studies, aspiring to be a performing artist and other circumstances caused me to drop out and end up joining the union, and I ended up working a gig on Bourbon street at a place where this man (Joe Lastie Jr.) is working at The Maison Bourbon, my first jazz gig back in 1978 – and I haven’t stopped since! I was sixteen years old actually when I decided – his (Louis Ford’s) father was a great saxophonist, clarinettist, musician that I had an opportunity to learn from as well, we played together. And when I say learn, when you get on the bandstand and stand next to, like, his dad Clarence Ford was a master, and associated peers Ed Frank, a piano player – these men are deceased now but those are just mentioning two that I learned how to play jazz, the concept, how to develop a proper concept of improvisation so, you know, because jazz is a language with many different dialects, so you know, I chose that one, with a mixture of what I had been exposed to before I started playing what I would define as jazz or swing music. I knew I wanted to be a professional musician when I was sixteen. So that’s it in a nutshell, you know. Fifty nine now and I still love it!

Martin: Do you feel the classical music background helped?

Leroy: Yeah, as far as from a technical stand point, what the teachers had, they were giving me pointers on how to properly manipulate the instrument I mean, you know, any trumpet player can tell you, any wind instrument player will know that the instrument is demanding – you can’t just say “Okay, I’m gonna play” one day and then put the horn in the case and leave it for two or three days. I mean, you can, but it makes it rough when you come back and have to deliver with precision if you really, you know – so yes. I would say so in as far as the reading aspect as well, although there’s a misconception about New Orleans musicians, a lot of people think that New Orleans musicians all just play by ear; many of them do, but they also read music. I mean, we all read music. All these bands, we had marches and we had a guy, there were certain people wo – Adrian Morgan is a guy who was phenomenal, underrated – he wrote arrangements for the bands we played for in high school, and the hundred and twenty five piece band would play, like, say a tune like Marvin Gaye’s ‘Let’s Get It On’ or something like that, and it sounded just like the record because this man had transcribed parts that fit for each various instrument – low brass, upper brass, reeds, everything was just like that, and so when we would march up the street, like during carnival, we played all the parades, the band sounded like a mobile jukebox. Seriously! 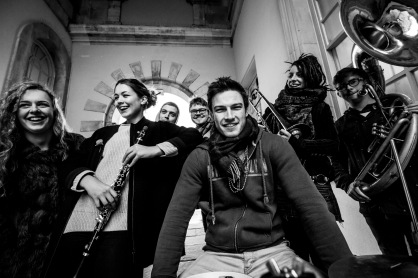 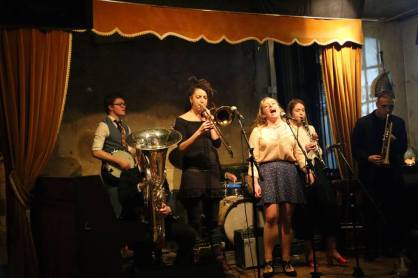 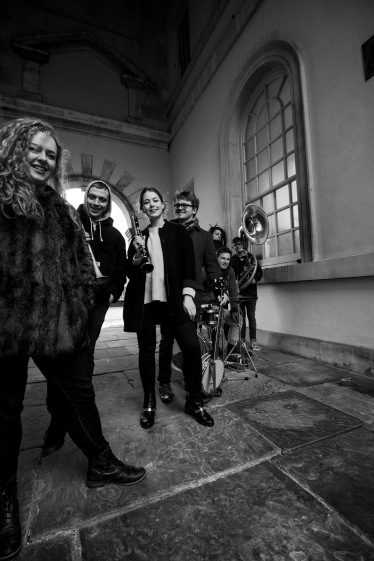 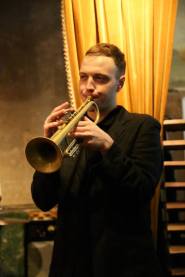 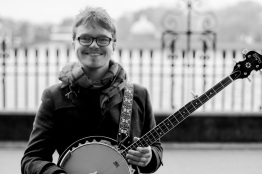 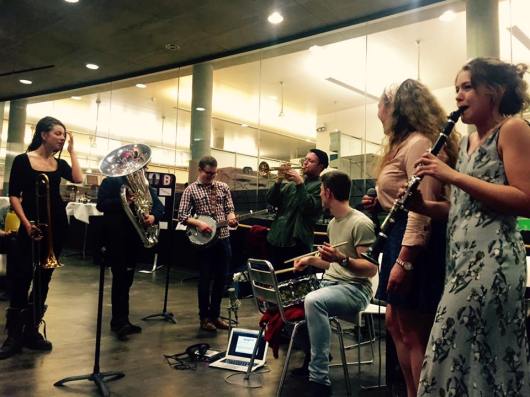 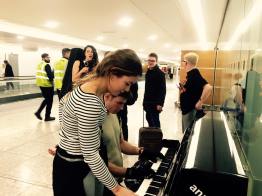 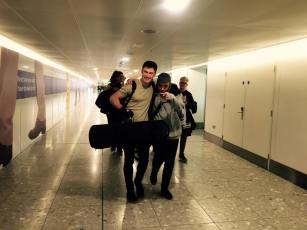 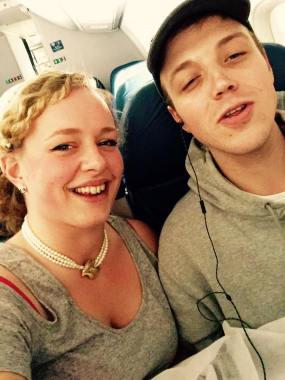 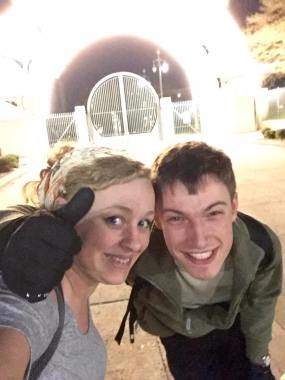 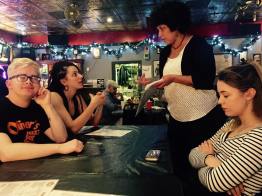